Anti-Transgender Legislation and the Politics of Patriarchy

Andrew Proctor is an assistant professor of politics at Wake Forest University.

The events in Wisconsin are part of a growing legislative assault on the rights of trans people to exist. According to data from the Movement Advancement Project, an LGBT advocacy organization, nine states have banned trans athletes from participating in sports consistent with their gender identity, and 22 state legislatures have introduced legislation to ban or criminalize gender affirming healthcare for trans young people, with bills passing in Arkansas and Tennessee.

From same-sex marriage bans in the 2000s and 2010s to anti-trans legislation today, the Republican narrative is a familiar one to LGBT people. Transgender people are being framed as a threat to cisgender people and, therefore, they must be denied autonomy, dignity, and freedom to live authentically. With recent legislation, Republicans have framed trans women’s and girls’ participation in sports consistent with their gender identity as a threat to cis women’s equality. This serves to drive a wedge between cis and trans women under the guise of “biological sex differences” despite the absence of evidence that sports participation poses a problem.

But when we look more closely at who supports athletic bans, it becomes clear that anti-trans legislation is part of a political project to maintain systems of patriarchy.

Men are more likely to support anti-trans legislation than women despite the supposed “threat” to them.

When asked about whether trans students in grade school should be allowed to play on sports teams consistent with their gender identity, 55% of women support trans inclusion compared to 45% of men, a gender gap of 10 percentage points. The gender gap is 16 percentage points when asked about collegiate sports, where just 41% of men support trans inclusion, compared to 57% of women. The same poll also found a six percentage point gender gap in support for the Equality Act, a federal LGBT civil rights bill. There was no gender gap when respondents were asked about anti-trans medical bills; a majority of both men and women oppose legislation that criminalizes or bans trans minors from gaining access to gender-affirming healthcare.

In line with the partisan nature of anti-LGBT politics, Republicans overwhelmingly support anti-trans legislation while Democrats oppose it, and the attitudes of independents fall in between supporters of either party. Reducing policy support to partisanship alone, however, masks a gender gap within political parties and among independents.

Gender Gap in Support for Trans Inclusion in Sports by Partisanship 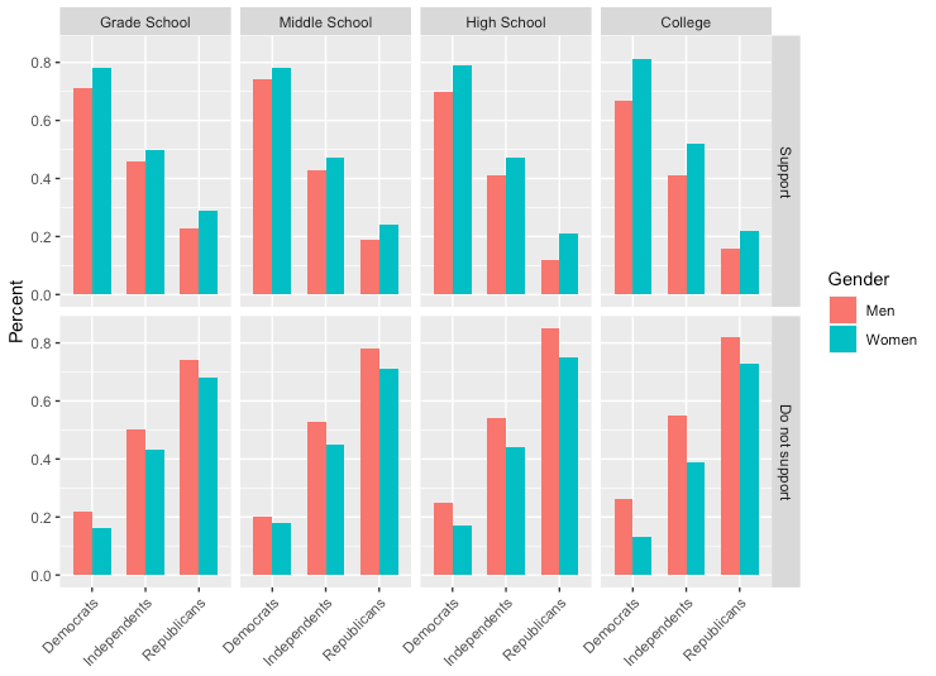 Although Republicans’ discourse has framed their legislation as an effort to “protect” women, men are more opposed than women to trans people’s participation in sports consistent with their gender identity. In the disconnect between the narrative around these bills and underlying public opinion, we can see how political representatives use cultural characterizations or popular images of a target population to create and reinforce social boundaries between dominant and marginalized groups.

Anti-trans sports legislation denies transgender women recognition as women, which reinforces biological sex binaries that contribute to systems of patriarchy. Within this framework, it is less surprising that men, not women, are more opposed to the inclusion of trans people in sports.

Anti-trans sports legislation denies transgender women recognition as women, which reinforces biological sex binaries that contribute to systems of patriarchy. Within this framework, it is less surprising that men, not women, are more opposed to the inclusion of trans people in sports. Accepting that trans and cis girls and women can play sports together challenges the very logics and power structures that cis men benefit from. And the centering of trans women and girls, but not trans men and boys, in discourse surrounding anti-trans bills suggests that transmisogyny can help explain why there is a persistent gender gap across parties.

These policy dynamics are partially outcomes of Title IX, which integrated women’s equality in the classroom but segregated them in sports. As Elizabeth Sharrow explains, Title IX has authorized the notion that men and women are inherently different, as policymakers wed biological sex to policy through perceived capacities of women’s bodies. As Republicans work to ban trans people’s inclusion in sports and their existence more generally, President Biden’s administration extended Title IX protections to trans students in June 2021. This development is politically important because it is an attempt to reshape the very policy that underscores the idea that men and women are inherently different through biological sex binaries.

Despite progress at the federal level, state legislation prohibiting trans athletes from participating in sports consistent with their gender identity will have detrimental impacts on their wellbeing.

Despite progress at the federal level, state legislation prohibiting trans athletes from participating in sports consistent with their gender identity will have detrimental impacts on their wellbeing. Research has shown that participation in sports can improve mental, social, and physical health as well as academic performance. These bans exclude trans people from those benefits, contributing to health disparities between cisgender and transgender people, who already exhibit worse health outcomes including high rates of suicidal ideation. Coupled with a growing number of legislatures considering bills that deny access to gender-affirming medical care, trans people continue to be threatened and pushed to the margins by a society invested in upholding systems of patriarchy.

Andrew Proctor is an assistant professor of politics at Wake Forest University. He was previously a Presidential Postdoctoral Fellow in political science at the University of Minnesota-Twin Cities.