Nestled in the foothills of the Appalachian mountains, Chattanooga, Tennessee is one of the country’s most thriving, if unassuming, tech hubs. At the center of it all is the newly developed “Innovation District.” The mixed-use development integrates public art, green spaces, communal workplaces, and bike lanes as a means of facilitating connections and promoting the district’s ethos of “Collide. Connect. Collaborate. Create.”

The formula for Chattanooga’s success can be found throughout the country and globe. From Science City in Copenhagen to the Cortex District in St. Louis, local leaders have invested heavily in creating environments where tech innovation thrives. Key to these efforts is the idea that facilitating the exchange of ideas and knowledge fosters creativity that is fundamental to productivity in information-based economies. Places where workers from different firms and occupations have the opportunity to interact, network, and share knowledge have an advantage over labor markets where people work in relative isolation from one another.

This “mix and stir” approach to tech growth is important, but economists and sociologists have shown that labor markets with greater diversity increase the chances that workers are exchanging unique information and learning from each other’s different perspectives. In places with greater ethnic and racial diversity, more languages spoken, a higher share of foreign-born workers, and tolerance toward sexual minorities, workers exchange unique viewpoints that enhance creativity, problem solving, and innovation.

To facilitate growth in information-based industries like tech, cities have invested in creating environments that facilitate the interaction of diverse workers. Yet spatial constraints are not the only barrier to creative exchange. In fact, one of the most enduring features of labor markets is the tendency for women and men to work in different occupations. As recently as 2018, over 40% of women and men workers would have to change occupations for them to be evenly distributed. Occupational gender segregation matters for economic growth—but it’s not inevitable.

In our recent study, we asked whether these persistent patterns of occupational gender segregation pose a barrier to collaboration and the exchange of information that is central to productivity in information-based high-tech industries. Feminist scholars have long established that women and men occupy different structural positions in society, leading them to varying life experiences and personal viewpoints. As a result, collaboration between women and men may enhance creative problem solving, innovation, and productivity. High levels of occupational gender segregation, in contrast, separates women and men into different job types, limiting their interaction and opportunities for information exchange.

Using annual data from the American Community Survey (2005 – 2019), we examine the relationship between local levels of occupational gender segregation and two measures of growth: the size of local high-tech sectors as a share of employment and the productivity of tech industries.

Occupational segregation between men and women working in the tech sector varies by locale. In the following map, darker colors indicate higher levels of segregation and lighter colors reflect lower segregation. In general, coastal areas had lower levels of occupational gender segregation compared to inner regions of the U.S. Yet important differences exist between nearby labor markets.

These differences matter. Looking at the impact of gender inequality on economic growth, we find that occupational gender segregation stalls tech growth, while also hindering productivity. 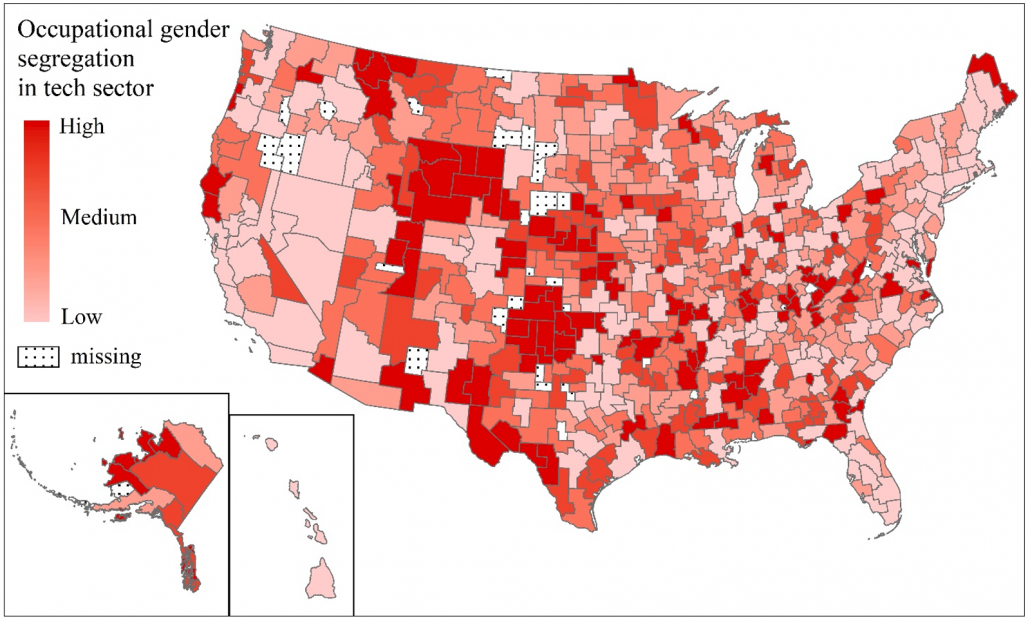 Source: American Community Survey 2019. Segregation measured with index of dissimilarity. High levels of segregation reflect an index greater than 0.6, medium levels are around 0.5, and low levels are less than 0.4.

Local tech sectors across the U.S. have varying levels of occupational gender segregation. These differences have major economic consequences. We find that between 2005 and 2019, labor markets with higher levels of occupational gender segregation experienced less tech sector growth and had lower productivity than places where women and men more commonly worked in similar occupations. The separation of women and men into different occupations limits the exchange of information, knowledge, and ideas that are vital to industries that rely on innovation.

Our findings suggest that gender equality—specifically the occupational integration of women and men—is a key ingredient to local economic growth. Efforts to foster creative exchange among workers must be supplemented by meaningful steps to promote gender equality through reduced occupational segregation. As regions strive to be competitive in the new economy, those fostering collaboration between women and men will be better positioned to succeed.

Although private employment in the tech sector occurs outside the direct reach of municipalities, policymakers can facilitate conditions that address local levels of gender inequality. Research has shown that public policies promoting affordable and accessible childcare are associated with higher levels of mothers’ wages and employment. Such programs help retain highly-skilled workers after childbirth and, as a result, will contribute to lower levels of gender segregation as mothers advance in male-dominated fields rather than putting their careers on hold or exiting the labor force.

Local policies subsidizing childcare expenses, instituting universal pre-K, and enhancing public childcare options are some initiatives that local leaders may not consider to be directly related to tech growth, but which may have significant indirect effects on reducing local levels of occupational gender segregation and enhancing collaboration between women and men workers.