Elizabeth Sharrow is an associate professor of public policy and history at the University of Massachusetts Amherst.

On October 9, the University of Minnesota Board of Regents voted to eliminate three intercollegiate sports at the end of the 2020-21 academic year: men’s gymnastics, men’s tennis, and men’s indoor track and field. This verdict – originally announced one month prior in an open letter from the Director of Athletics, Mark Coyle – placed Minnesota among a host of other high-profile athletic departments that have announced team cuts since the beginning of the COVID-19 pandemic. Across the country, hundreds of varsity-level teams face elimination.

Financially, the choice to postpone Big Ten Conference athletic competition due to the pandemic resulted in a multi-million dollar anticipated budget shortfall. But Coyle also placed the blame for cuts on the legal requirements stipulated under Title IX of the Education Amendments of 1972, a federal civil rights policy which requires sex equity in American education. That Title IX is front of mind for athletic leadership is unsurprising. The university recently entered into a resolution agreement with the Office for Civil Rights in the U.S. Department of Education after a formal, athlete-initiated grievance in 2018. Coyle’s letter provides insight into subsequent department practices.

These practices, and the way leadership frames them for the public, impact the long-term health and well-being of athletes’ civil rights. The latest programmatic and rhetorical choice to pit men’s teams against women’s teams obscures longstanding inequities and raises serious concerns about current leadership’s commitment to comprehensive gender equity in Gopher Athletics.

Coyle suggests in his letter that Title IX’s requirements constrain his options in responding to the budgetary crisis. In particular, he notes the obligation to provide athletic participation opportunities for women and men that are “substantially proportionate” to the undergraduate student body (i.e., if 54% of the undergraduate population are women, then 54% of roster spots should be reserved for women athletes). Because competitive athletics have long been organized through sex-segregated teams, the calculus of equity is founded on sex-based comparisons.

Athletic scholarships also matter, though scholarship allocation must be proportional to athletic opportunity. Because women’s undergraduate enrollment outpaces men’s (a fact which has been true nationally since the early 1980s and which is itself another implementation effect of Title IX), Minnesota is technically bound by federal law to offer greater athletic opportunities to women than to men. As analyses of data reported to the Department of Education under the Equity in Athletics Disclosure Act (EADA) show, they have been close to doing so based on total reported count of “athletic opportunities” in many, but not all, of recent years. 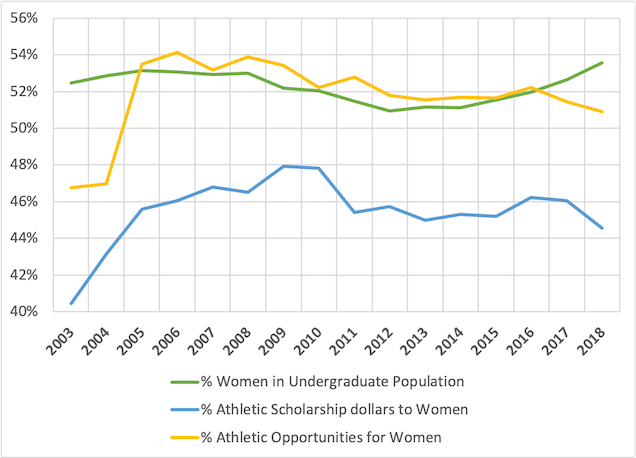 However, the data reveal a number of concerns. Athletic scholarship dollars awarded to men comprise a significantly greater percentage of the whole, and the data from 2017 and 2018 suggest a hastening downward trend in both opportunities and scholarships for women. Furthermore, the counts comprise total participation opportunities, which are different and distinct from total, individual athletes. For example, a runner who competes in cross-country, indoor track and field, and outdoor track and field could be counted three times in the total “participation opportunity” count even though they are only one person.

The EADA requires schools to report both their participation opportunity count and the number of “unduplicated” opportunities (i.e., number of individual athletes). The unduplicated count is arguably a more accurate measure of access to athletics. These counts suggest a worrying trend in Gopher Athletics over the past ten years, with women athletes lagging behind in access to competitive athletics as compared to their undergraduate enrollment. 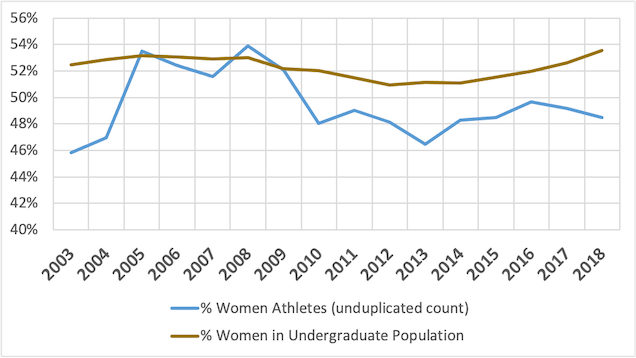 The open letter suggests that the department is attentive to this trend. And if proportionality was the only metric by which we could consider equitable practices, Coyle’s stance might be the end of the discussion. However, Title IX’s equity requirements also include a range of other practices in determining compliance with this civil rights law. Institutions must also be attentive to their “history and continuing practice of expanding participation opportunities” for “the underrepresented sex” (i.e., women), and should consider if they have “fully and effectively” accommodated their interests.

Coyle acknowledges that the most equitable evolution in athletic programming would be to add women’s teams.

Coyle acknowledges that the most equitable evolution in athletic programming would be to add women’s teams, a strategy that led Minnesota to create programs for women’s soccer, women’s ice hockey, and women’s rowing in the late 1990s. But he argues that COVID-19 foreclosed this possibility because of the resulting financial strain on the department budget. He states that the department had no choice, under Title IX and given their “steadfast” commitment to gender equity, but to cut men’s teams. It was later announced more quietly that they will also cut 41 additional women athletes from current rosters. These roster cuts target sports with the lowest cost-per-athlete (e.g., women’s cross country and rowing), and eliminate only non-scholarship athletes. Along with the eliminated men’s teams, these cuts will dramatically reduce participation opportunities in ways that do little to reduce spending.

Title IX does not require strictly equitable spending, though Coyle asserts that the consequences of the team and roster cuts will reflect Minnesota’s continued commitment to equity. So what has that commitment looked like in past years? Spending on men’s teams dramatically outpaces that for women, and the past decade has only seen that trend accelerate. In fact, since 2009, the department has reported spending more on football alone than on all women’s teams combined.

Expenses for Men’s and Women’s Teams, University of Minnesota 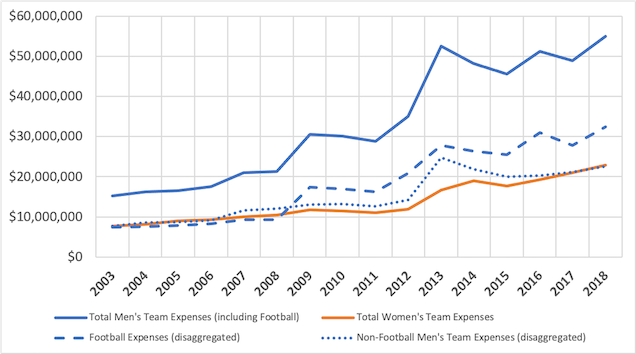 Little attention is paid to these spending inequities, although my research demonstrates that they are endemic across the Big Ten Conference schools. Importantly, these trends comprise a host of more nuanced gendered inequities across a wide swath of activities, since total expenditures include spending on travel and competition, staff salaries, recruiting, equipment and more. Although Title IX may not specifically prohibit unequal spending, absolute commitment to gender equity is simply discordant with such wild expenditure inequities.

Although Title IX may not specifically prohibit unequal spending, absolute commitment to gender equity is simply discordant with such wild expenditure inequities.

While many critics will point to the unique position of some sports to generate revenue, legal protections against sex discrimination under Title IX do not require athletes to “produce revenue” in order to be treated as full citizens. As a public institution which benefits from significant taxpayer funding, any actions by leadership which value or promote profit-seeking over nondiscrimination policy should be closely scrutinized.

The consequences of these decisions and the way they are publicly framed by athletic leadership matter. My research indicates that athletes in the Big Ten are aware of and concerned about inequitable practices within their athletic departments. The response by current athletes to Coyle’s announcement illustrate this point – the athletes organized a 400-person rally and an online campaign to contest the cuts, acting every bit the policy stakeholders in their political mobilization. Alumni donors, including some with gifts reportedly in excess of $1.5 million, also declared their intent to withdraw financial support from the University after the cuts – a consequence that will hardly lessen the financial strain facing Athletics.

Statements by leadership can either bolster knowledge and support for public policy or undermine it. Previous research shows that fully accurate athlete knowledge of Title IX’s requirements remains lacking, and my recent study of opinion toward Title IX during the pandemic suggests that crisis framings may undermine support for policy. Athletes – as well as the general public – learn about politics from policy discussions, including statements about policy implementation like that issued by Coyle.

Equity Need Not Be a Zero-Sum Game

There are alternative solutions for the future of Minnesota Athletics. For example, rather than pitting men’s teams against women’s, the department could alter the roster size of its largest sport: men’s football. Although roughly 115 men comprise the roster, only a portion of them see playing time throughout the season and only 11 players participate in the game at any given time. Even with allocations for offense, defense, and special teams, the football roster could be much slimmer. In the NFL, rosters include only 53 players.

Since the cost per athlete is much higher in football than any other men’s sport except basketball, cutting roster spots for football instead of entire low-cost men’s teams could allow for a less expensive and more equitable outcome.

Since the cost per athlete is much higher in football than any other men’s sport except basketball, cutting roster spots for football instead of entire low-cost men’s teams could allow for a less expensive and more equitable outcome. As it stands, the department seems more willing to consider cutting additional teams than to decrease football spending. In the same year as football coaches were extended multi-million, multi-year contracts, seven head coaches of other sports were granted contracts with “program elimination” termination clauses. In short: more team cuts may be forthcoming.

Ultimately, athletes who compete at the University of Minnesota are policy beneficiaries, protected by civil rights law against discrimination. The incomplete picture Gopher Athletics paints of their commitment to Title IX glosses over inequitable practices, ignores alternative solutions which could better address the financial strain as the pandemic worsens, and fundamentally undermines the pursuit of gender equity more broadly. Public institutions like the University of Minnesota owe better to the stakeholders they serve.