Ashley Sorensen is a PhD student in political science at the University of Minnesota.

Both Democrats and Republicans have called the 2020 election the “year of the woman.” The current 117th Congress is the most diverse Congress yet, with a record number of women and women of color. The increase in women elected to Congress in both 2018 and 2020 can be in part attributed to the record numbers of women candidates running for the U.S. House of Representatives, but that is not the entire story.

Partisanship, race, and the decision to run when and where they have better prospects of success all influence women’s electability. The data show that women candidates—particularly Democratic women—have found ways to close the gender gap at the ballot box in recent years. While congressional elections are not truly gender neutral if women need to be more qualified and strategic than men to win, understanding their recent successes can help chart a path to gender parity in Congress. 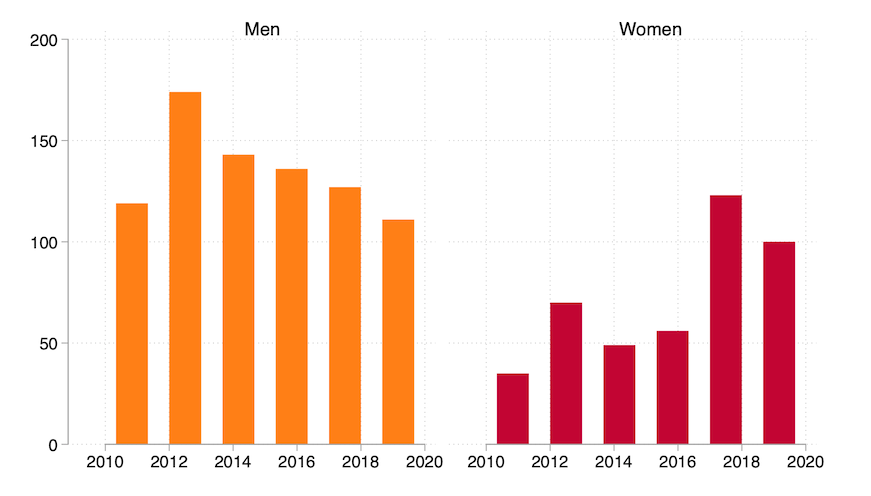 Political Experience and Deciding to Run

Women are generally held to higher standards than men in elections. They face tougher primary competition, requiring them to demonstrate their legitimacy before the general election. And while prior political experience benefits both men and women, women need more qualifications than men to gain support from the same voters. As women often require a specific set of traits to succeed in elections and face more obstacles, it is clear the electoral process is far from gender neutral.

It is clear the electoral process is far from gender neutral. But even as the process disadvantages women, it doesn’t stop them from winning.

But even as the electoral process disadvantages women, it doesn’t stop them from winning. The disadvantages women face are more likely to shape their decision to run rather than their success once in the race. Democratic women run in districts with a strong history of electing Democrats to overcome stereotypes related to their beliefs. Women’s desire to make policy change rather than seek personal political power motivates their decision to run. Compared to men, women with political ambition care more about their qualifications and how their personal responsibilities will affect their campaign time. For better or worse, women are more likely than men to be well qualified candidates who run when they’re prepared.

Yet the importance of preparation doesn’t apply equally to all Democratic women. Women of color face hurdles that white women in the same party do not. Although local party chair leaders are just as likely to encourage women to run for office as men, they perceive Latinx and Black candidates as less viable than white candidates. Concerns over women of color’s electability is not limited to party leaders either. At the presidential level, primary voters and activists overwhelmingly believed that only a white man could defeat Trump throughout the 2020 Democratic presidential primary. The consequence of these beliefs is that women of color often need more experience than men and white women to achieve the same electoral outcomes.

In order to uncover Democratic women’s pathways to Congress, I analyzed all U.S. House races from 2010-2020 in which a non-incumbent Democratic candidate ran against a Republican, including various demographic and political measures of candidate attributes and district competitiveness. This analysis yielded three main findings about Democratic women’s electoral success. 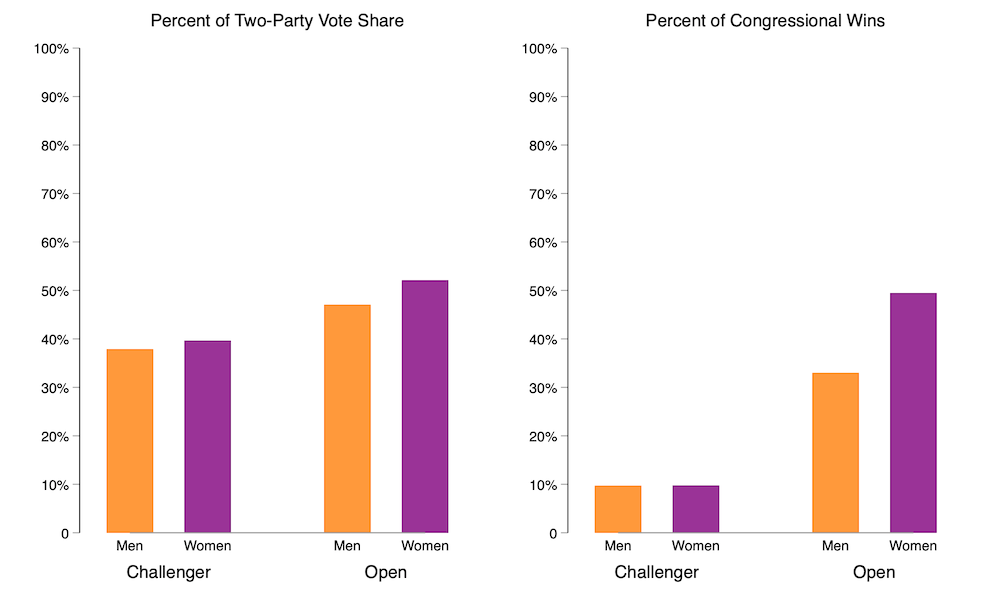 Although women win more often than men, the electoral process still disadvantages women. The barriers Democratic women face pop up early in the election cycle. But these data show that once women decided to run and made it past the primary election stage, their prospects of winning were better than men’s. Candidate and district level characteristics like running in a majority-minority district, prior political experience, share of campaign spending, a district’s previous votes for Democratic congressional and presidential candidates, and running against a Republican woman increased the odds of obtaining votes and winning a congressional election. Women were more likely than men to run in noncompetitive races and against another woman, and to have prior political experience. Their campaigns also accounted for a greater share of both candidates’ spending.

But the electoral process is gendered and racialized. Women of color face additional hurdles when running for office compared to Democratic white women. So how can we reconcile women of color’s’ adverse experiences and their historic wins in the 2018 House elections?

3. Women of color were more likely to win than white women because of their greater qualifications and tendency to run in districts favoring Democratic candidates.

Despite being perceived to be more liberal than white women and men, women of color had a 5.9% larger vote share and were 16.8% more likely to win than white women. These candidates used voters’ biases to their advantage by running in liberal and majority-minority districts. The results show that women of color were less likely to run against an incumbent in safer districts or district with a higher percentage of support to previous Democratic candidates. In contrast to white women, women of color had more political experience and their campaigns accounted for a larger share of spending. 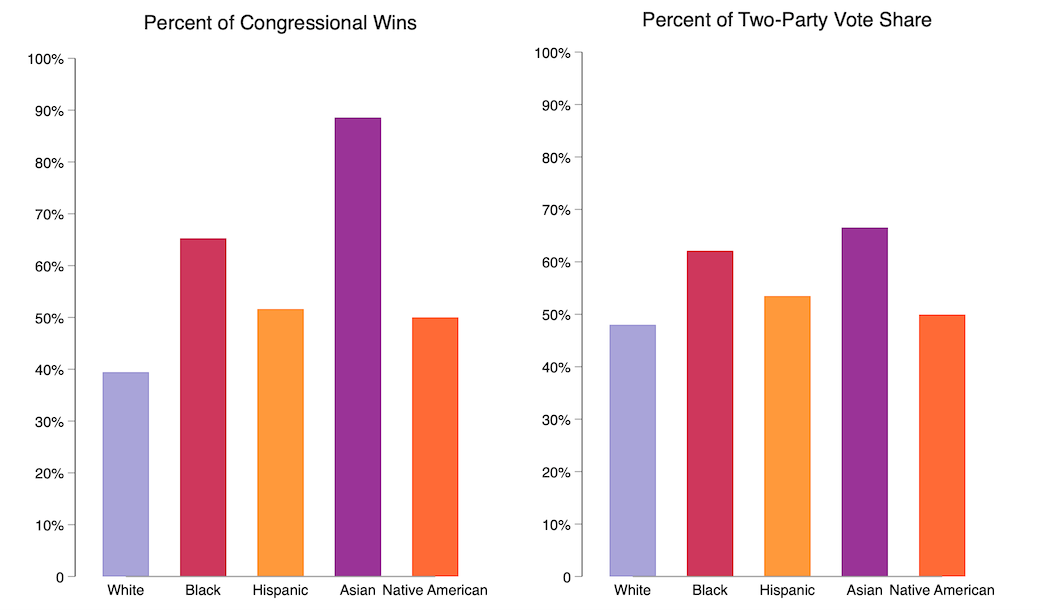 Likewise, women of color sought to run in majority-minority districts (27.6%) more often than white women. Because the percentage of non-Hispanic white people is less than 50% in majority-minority districts, white voters’ negative racial attitudes are less consequential to the election outcome in these races. In fact, even though Black women on average receive less support from white voters, Black women receive the highest levels of support from other Black women and Black voters turn out to vote at higher rates when Black a candidate is running.

We can attribute Democrats’ and women’s recent gains in Congress to their qualifications and continued thoughtfulness about where to run, as well as the greater numbers of Democratic women running in the 2018 and 2020 cycles. But notwithstanding recent gains, women are 15% less likely to ask about running for office than men are.

One of the main reasons women don’t run is because they are simply not encouraged to do so. These findings underscore the importance of showing Democratic party chairs and primary voters that their concerns over women’s viability in congressional elections are unfounded. Our data suggest that while structural disadvantages persist, once women are in a general election, their electability is often greater than men’s.

Voters are ready for more women in Congress. They just might not know it yet.

Note: Graphic and statistical data on congressional district and election characteristics was generously provided by Gary Jacobson at the University of California, San Diego. Data on the racial makeup of districts came from the U.S. Census Bureau’s, American Community Survey 1-Year Estimates. We used Sorensen and Chen’s (2021) dataset to note candidates’ demographic information.

Ashley Sorensen is a PhD Student in political science at the University of Minnesota. She is a Gender Policy Report-Race, Indigeneity, Gender and Sexuality Studies Graduate Research Fellow through the Graduate Research Partnership Program of the College of Liberal Arts and a 2017 Truman Scholar from South Dakota.