Gender and the 2018 Teacher Strikes 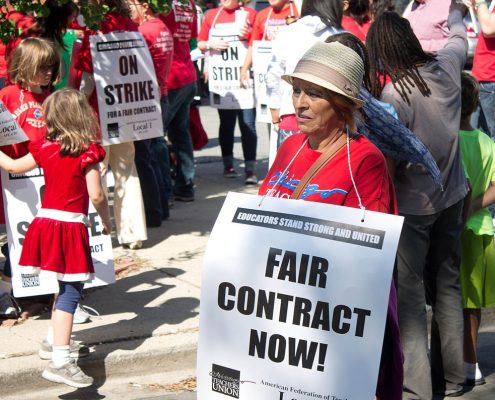 In February 2018, roughly 20,000 teachers went on strike in West Virginia, shutting down schools in all 55 counties and affecting 250,000 students and their families. This labor strike was particularly surprising in a politically conservative state where teachers lacked the legal right to strike or bargain collectively through a union. By May, teachers in Oklahoma, Arizona, Colorado, Kentucky, and North Carolina had staged walkouts and closed schools across their states for days that, in some cases, stretched into weeks.

Commenters have dwelled on the novelty of strikes in anti-union states, and, in an era not widely associated with labor militancy, of widespread strikes happening at all. At the Gender Policy Report, we have been particularly struck by how little attention gender has received in public conversations about the strikes. The vast majority of public-school teachers—76%—are women, and that percentage has expanded in recent decades.

We invited labor and education scholars to bring their historical and contemporary research findings to bear in outlining the economic and social implications of the gender imbalance in teaching, in union leadership, and in the legislative trends that have targeted public sector employees like teachers. These essays provide thoughtful explorations of how gender matters in conflicts over public education, and they urge policymakers and the public to bring gender into the conversation as near local, state, and national elections that will have substantial impacts on labor and public education.

Serving the Public: Black Women at the Center of Labor Struggle

Elizabeth Todd-Breland: The recent #RedForEd strikes have highlighted a duality that Black women educators have long addressed—that their interests as public employees are connected to their concerns for the communities they serve.

Jessica Wilkerson: The West Virginia teachers’ strike builds upon a longer movement that has primarily been led by women in Appalachia, one staked on expanding working people’s access to political power and equalizing public services.

Jon Shelton: The spring 2018 teacher strikes in Republican-dominated states were an unprecedented, collective response of a mostly female workforce against a decades-long assault on public education.

International Treaty to End Violence Against Women
Scroll to top