Serving the Public: Black Women at the Center of Labor Struggle

Many of the recent #RedForEd strikes have taken place in states with largely White populations and largely White teaching forces, including West Virginia , Oklahoma, and Kentucky. This has meant coverage of these events often overlook the many commonalities between these protests and earlier organizing by Black teachers in cities like Chicago.

One point of convergence is how #RedForEd highlights a duality that Black women educators have long addressed: teachers’ interests as public employees are connected to their concerns for the communities they serve.

The concerns of Black women and their communities, must be central to our modern labor struggles. The 2018 U.S. Supreme Court ruling in Janus v. AFSCME allowed public employees to opt out of paying dues to unions representing them, dealing a potential blow to the membership rolls and power of public sector unions. Many have noted that the impact of Janus will be particularly detrimental for Black women, who are disproportionately represented in the public sector. In 2016, Black women made up nearly 18 percent of public sector workers, but only 6 percent of the overall workforce.

In One Nation Divisible, historians Michael Katz and Mark Stern reveal that, between 1950 and 2000, the percentage of Black women employed in public and state-related jobs increased from under 15 percent to 43 percent. The expansion of jobs in government, health care, and educational institutions in that period created significant new employment opportunities.

Make no mistake: these gains, particularly for Black educators, were forged through struggle.

In light of recent political and judicial attacks on teachers and public sector workers, as well as the protests fighting back against retrenchment, it is worth revisiting the history of organizing by Black women educators. A look at their work in Chicago, in particular, demonstrates the power of organizing work that bridges the workplace and communities in movements for racial and gender justice, while also exposing the long history of challenges to these efforts.

Throughout the 1960s, Black teachers were engaged in dual struggles—advocating for themselves as Black public service workers and on behalf of the predominantly Black students and communities they served.

The dramatic increase in the number of African Americans working for CPS in the 1970s and beyond would not have been possible without the political organizing of Black teachers, students, and community organizations that pressured the CTU and Board of Education to hire, certify, and promote more Black teachers, administrators, and staff.

Historian Dionne Danns notes that, coupled with federal government pressure to desegregate faculty, this organizing transformed the demographics of CPS employees. As I document in A Political Education, in 1969, African Americans made up only 34 percent of CPS teachers (7,844 teachers). By 1984, Black teachers outnumbered White teachers for the first time in CPS, constituting nearly 47 percent of the teaching staff (11,688 teachers).

Black CPS teachers and staff served as anchors of communities, caretakers of children, and a relatively stable Black urban middle class employed in the public sector during an era of deindustrialization. Indeed, the rise and fall of Black employment opportunities are often discussed through narratives of industrialization and deindustrialization. However, research by geographer Virginia Parks reveals that manufacturing work was not always the singular, nor most important, route to middle-class status for African Americans during the last half of the twentieth century. By 1980, 31 percent of Black women and 23 percent of Black men working in Chicago were employed in the public sector, compared with 12 percent of White women and 11 percent of White men. As Katz and Stern argue, “public employment became African Americans’ distinctive occupational niche.” Between 1970 and 2000, Black women, specifically, were disproportionately represented and relied more heavily on public sector employment than any other demographic group (by 1987, 80 percent of Black teachers in Chicago were women).

In 1984, Jacqueline B. Vaughn became the first African American, first woman, and first elementary school teacher to serve as president of the CTU. Black activist educators also contributed significantly to the coalition that would elect Harold Washington as the city’s first Black mayor in 1983.

And then came the backlash. The number and proportion of Black teachers in CPS declined dramatically: in 1996 roughly 43 percent of CPS teachers were Black, at the start of the 2018-2019 school year, that had dropped to 21 percent. Several factors contributed to this decline. Beginning in the 1990s, privatization policies and school closings were among the most impactful. Black teachers are more likely to work in predominantly Black schools, the same schools that were disproportionately targeted for closure or “turnaround” plans. When Black schools were closed or transformed into charters, Black students lost neighborhood schools and Black teachers lost their jobs. Of the fifty CPS schools closed in 2013, more than 70 percent had majority-Black teacher and student populations.

It is no coincidence that these Black neighborhoods where schools were closed suffered other forms of systemic disinvestment and inequality in this neoliberal era, from home foreclosures to commercial flight, mass incarceration, and a lack of access to health care and grocery stores.

The combined decline in middle-class public sector jobs—like teaching—and the deterioration of conditions for Black women already living at the bottom of the economic ladder has had disastrous consequences for Black women and Black communities. According to a report by the National Women’s Law Center, in 2016, Black women were significantly overrepresented in low-wage service sector jobs with the highest expected growth (personal care aides, home health aides, and food preparation and service workers). Working long hours with little job security and few benefits, Black women accounted for 25 percent of these workers, while only making up 6 percent of the overall workforce. With incomes below, at, or just above the poverty line, many Black families were thrust into the ranks of the “working homeless.”

But, a new era of organizing is also upon us. In 2012, led by veteran Black educator Karen Lewis, Chicago teachers and allied community groups donned red shirts and took to the streets.

They demanded better wages and benefits for teachers as well as increased resources and social services for the city’s majority Black and Latinx students and communities. In 2017 and 2018, in traditional labor strongholds and right-to-work states, unionized and non-unionized workers have taken up this fight too, connecting their interests as workers with the concerns of the communities in which they work and live. From organizing by home health care workers to the Fight For 15 and #RedForEd, women workers in “feminized” jobs are protesting  against poverty wages, workplace sexual misconduct, and racial and gender discrimination. They are demanding basic dignity and professional respect.

Black women are leading the resistance and proposing alternative futures.

Working at the intersection of racism and sexism, Black women continue to make linkages between their demands as workers and the needs of their communities. Centering Black women–and their concerns, organizing, and policy solutions–will help to ensure that policies aimed at improving the lives of workers also improve the communities where workers live, work, and serve. 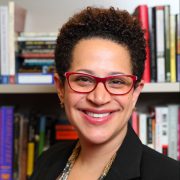 Elizabeth Todd-Breland is the author of A Political Education: Black Politics and Education Reform in Chicago Since the 1960s and assistant professor of history at the University of Illinois at Chicago.

Photo by Howard Heath originally in Solidarity US