Walking and Talking Women’s Rights in the Global South

Nir Rotem is a Ph.D. candidate and Elizabeth Heger Boyle is a professor of sociology at the University of Minnesota.

Opinion surveys around the world suggest significant levels of support for women’s rights. For most countries, the U.S. being a notable exception, these norms are shared globally through instruments like the widely-ratified Convention for the Elimination of Discrimination Against Women (CEDAW). International treaties urge countries to move toward the ideal of “gender equity.” The hope is that the spread of this ideal will lead to women’s empowerment, a multi-dimensional outcome that ensures women have opportunities to make strategic life choices that were formerly denied to them—for example, picking their own profession and spending their earnings as they choose.

However, we cannot presume that empowerment, something performative and operational in women’s lives, necessarily corresponds to internalized support for women’s rights. Women may express support for rights but find empowerment unattainable or irrelevant in their personal contexts. In addition, women who reject the idea of gender equity as a general principle may personally hold considerable power within their household.

Women may express support for rights but find empowerment unattainable or irrelevant in their personal contexts. In addition, women who reject the idea of gender equity as a general principle may personally hold considerable power within their household.

To better identify the path to women’s empowerment around the world, we set out to explore the correspondence between a woman’s expressed support for gender equity and how gender equity operates in her household. This dynamic is critical to developing an understanding of contexts where rights remain at the level of discourse without leading to real reductions in inequalities, a complexity that needs the attention of policymakers and human rights advocates.

Measuring change in terms of rights can be complicated. To capture a broad, global view, we turned to the comparative IPUMS Demographic and Health Surveys (DHS). The DHS have been administered to representative samples of women in dozens of countries in the Global South since the 1980s, making it possible to study change over decades. For the purposes of this analysis, we focused on countries in Africa. (Future research will consider other parts of the world, including countries in the Global North.)

To assess women’s attitudes toward gender equity, we considered whether they were opposed to “wife beating.” Our measure of women’s empowerment was whether a woman “played a role” in important household decisions, such as deciding on major purchases. Based on their survey responses, we divided women into four groups. The blue and gold boxes in Table 1 represent women whose gender equity attitudes and empowerment correspond as would be expected—either women have internalized the principle of gender equity and have power in their households (blue) or they have not internalized gender equity and are not empowered (gold).

Happily, the proportion of women who are both opposed to intimate partner violence under any circumstance and who participate in household decision-making (represented in blue) has increased substantially over time. Survey respondents in this group rose from 31% of the total sample in the first wave of surveys (years 1999 to 2005) to 50% in the third wave (years 2012 to 2016). Still, women in this group are barely a majority in the final wave, suggesting considerable remaining resistance to ideals of gender equity.

Figure 1: Gender Equity and Empowerment at the Household Level 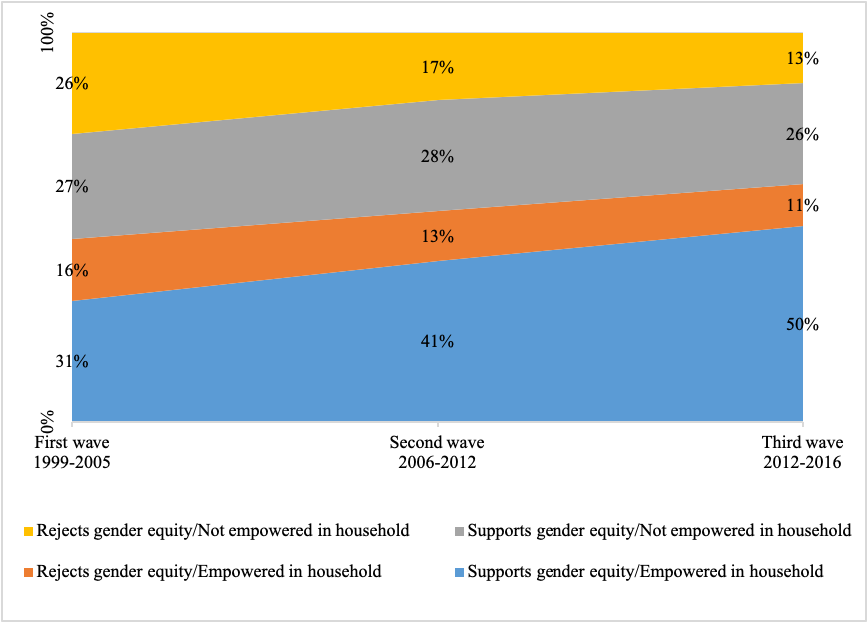 Equally encouraging, over time, fewer women (represented by gold) stand counter to emergent global norms on both dimensions. The group of women who thought wife beating was justified in some instances and who had no say in household decision-making decreased from 26% of survey respondents in the first wave to 13% of all respondents in the final wave. This group likely encompasses both women who have yet to be exposed to gender equity principles and women who have been exposed to, but have not adopted, these principles.

The other two categories each represent an apparent discordance between attitudes and lived experience. Understanding women in these categories is especially important because they may be transitioning toward embracing and implementing gender-equity norms; understanding their situations could hold the key for attaining meaningful gender equity globally.

Understanding women in these [discordant] categories is especially important because they may be transitioning toward embracing and implementing gender-equity norms; understanding their situations could hold the key for attaining meaningful gender equity globally.

The orange box represents women who are powerful actors within their households but continue to express views that are unsupportive of men and women’s equality. This group was the smallest of the four in the first wave (16%) and got even smaller over time (11% in the third wave). This is good news because it suggests that most empowered women ultimately internalize gender equity norms, which is important information for policymakers and activists promoting women’s rights.

Finally, we have women (represented by the gray box) who express support for gender equity but personally have no say in household decision-making. This group represents about a quarter of the entire sample in both the first and last wave. Some of these women are likely unable to translate their beliefs into a lived reality, blocked perhaps by household or community resistance. In this case, activists need to identify the social conditions that will allow these women to fully realize their rights—for example, operating alongside community and religious leaders to understand the reasons that prevent women from acting in accordance with the gender equity normative framework.

Alternatively, these women may be reflecting on women’s rights discourses and exercising agency by adopting some, but not all of them. When this is the case, these women’s ideas and experiences may open the door to new ways of understanding gender and power relations. Despite the seemingly universal nature of the right discourse, in some ways it reflects unique aspects of European or western cultures. It is important that rights activism take a wide-lens view on the nature of rights. Therefore, discussions with these women who seems to “talk the talk” but do not “walk the walk” should allow for a full range of perspectives to be considered and respected.

While our findings are preliminary, they do open new avenues in thinking about the operation of the global normative turn towards women’s rights. Not only do they tell us that for some women, the implementation of rights lags behind, they also suggest that attitudes supportive of women’s rights can be decoupled from empowerment. Exploring why this is the case is the goal of our research.

Authors’ note: The DHS questions capture simplified notions of gender from the period when they were first created. Specifically, they assume a gender binary and heteronormativity. These conceptual drawbacks are offset, however, by the surveys’ incredible value in making it possible to study change over decades.

Nir Rotem is a Ph.D. candidate in sociology at the University of Minnesota. During the summer of 2020, he was a Gender Policy Report-Race, Indigeneity, Gender and Sexuality Studies Graduate Research Fellow through the Graduate Research Partnership Program of the College of Liberal Arts.

Elizabeth Heger Boyle is a professor of sociology and law at the University of Minnesota.